98-year old, RAF, D-Day veteran Stanley Booker, from Bracknell in Berkshire has been awarded the Legion D’Honneur for his involvement in the liberation of France during the Second World War. 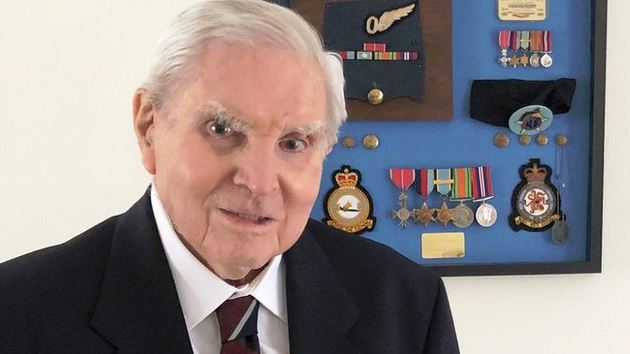 Former squadron leader Stanley Booker, who survived capture and interrogation by the Germans – was appointed to the rank of Chevalier in France’s highest order of merit last month.

Born in Gillingham, Kent, Mr Booker was just 17 when he signed up for the Royal Air Force as an apprentice. He trained in Wales as an observer before joining 10 Squadron as a navigator flying on Halifax bomber aircraft.

In June 1944, Mr Brooker’s aircraft was shot down over northern France. The aircraft’s pilot and wireless operator were killed, while other crew members escaped by parachute and went on to find refuge with the French resistance. Mr Booker was hidden by members of the resistance but betrayed to the German Gestapo by a Belgian “traitor”. He suffered “brutal” interrogations by the SS and Gestapo and was interned at Fresnes prison to the south of Paris, where he was denied prisoner of war status.

On August 15th, five days before the liberation of the capital in France by allied forces, Fresnes inmates were taken to Buchenwald concentration camp in Germany before being transferred to Stalag Luft 3 camp in Poland.

A few weeks later, the prisoners were forced on a three-week march back to Germany, where Mr Booker remained until the war in Europe ended in May 1945.

In 1946, he returned to France to seek for the War graves of the pilot and wireless operator killed in his plane’s crash, and to thank the members of the French resistance who helped protected him.

Following the end of World War Two, Mr Booker remained in the Royal Air Force and in 1948 joined 206 Squadron at Lyneham and flew on the Berlin Airlift (also known as Berliner Luftbrücke, literally "Berlin Air Bridge" in German) to deliver food and supplies to the German population of West Berlin.

In 1951, he was recruited to work for British intelligence in Hamburg and Berlin and undertook secret intelligence gathering of Soviet activities during the Cold War.

He was later made an MBE by the Queen for his work in British intelligence.

“He packed more into the first 20 or so years of his life than most would in their whole lifetime.

“Modest and unassuming his survival after bailing out of his stricken aircraft is a testimony to his courage, fortitude, and strength of character.

“Stanley has the greatest respect for the work that SSAFA do. He has made few calls on SSAFA but knows the charity is there for him if needed.

“His award of becoming a Chevalier in the Ordre National de la Legion d’Honneur is richly deserved.”