Forces Reunited handed over a cheque for £4,600 Cornwall based charity ‘Surf Action’.

Forces Reunited handed over a cheque for £4,600 to Cornwall based charity ‘Surf Action’. Forces Reunited, one of the largest British Armed Forces communities on the internet, has over a million members. The generous donation was amassed from contributions made by YOU, the great British public, via the Forces Reunited website. The donation will enable the project to put 10 armed forces veterans who are in need of improved physical and psychological wellbeing, through an, 8 week, ‘Ocean Therapy’ course.

Forces Reunited chose to support ‘Surf Action’ as this amazing award winning and pioneering project is dedicated to serving the needs of military veterans (including TAs and reservists) and their families, especially those affected by PTSD and physical injuries or those struggling to re-adjust to civilian life. Surf Action also supports those who have served or are serving in the ‘blue-light’ emergency services. By making use of the stunning coastal environment and offering holistic support which takes into account the practical, social and psychological difficulties which some veterans can experience. Above all they aim to put smiles back on faces.

‘Surf Action’ developed and refined its ‘Joined-Up Recovery’ model in order to best support its service users. The ‘Joined-Up Recovery’ model is a creative and practical approach that inspires personal empowerment, well-being, and self-discovery by involving the service users in surfing and other high intensity water-sports within Britain’s magnificent coastal environment. By assisting those in need of improved psychological well-being, greater self-esteem, greater confidence, greater motivation, greater self-belief, self-discovery, social development, employment guidance and empowerment, ‘Surf Action’ help them to build stronger connections in their family relationships, peer friendships and to develop a stronger connection to both the military and civilian communities. ‘Surf Action’ and its volunteers go out into both the military and civilian communities and continue to raise awareness of the effects of PTSD and other stress related conditions amongst service users and help to overcome the negative attitudes towards those who suffer from such mental health conditions. They speak at mental health conferences, to community and local government organisations, to health professionals, in schools and to employers. They speak to employers and employer organisations about the benefits of employing our service users and about practicable ‘reasonable adjustment’ for those who may suffer from a mental health condition. PhD research recently carried out with Loughborough University has validated the ‘Surf Action’ model and significantly extended previous knowledge on physical activity, military veterans and PTSD by highlighting how nature-based physical activity – encapsulated in the conceptual notion of the “Blue Gym” – can significantly promote well-being among military veterans.

The project, which has worked with hundreds of veterans and service personnel since 2009, was runner up in the 2011 National Lottery Awards in 2011 for the best health project and has been part of the national advertising campaign.

Surf Action would like to thank ‘Forces Reunited’ for their kind donation of £4,600 to cover the cost of putting 10 armed forces veterans who are in need of improved physical and psychological wellbeing, through our, 8 week, ‘Ocean Therapy’ course. The support of organisations such as ‘Forces Reunited’ is invaluable to us in being able to best support veterans who have been, adversely affected by their service.

Forces Reunited is delighted to be supporting Surf Action with this donation. CEO Dominic Hayhoe, an ex-serviceman himself, says “I understand the need for the help that this charity provides to those suffering from trauma or injury, and when trying to return to civilian life. I started Forces Reunited just over 20 years ago, to help forces pals find each other, it’s been an exciting journey for us, and we’ve supported many very worthy charities along the way. We’re extremely proud to be able to make this donation to Surf Action, and look forward to following the progress of the 10 veterans as they undertake their Ocean Therapy Course.” 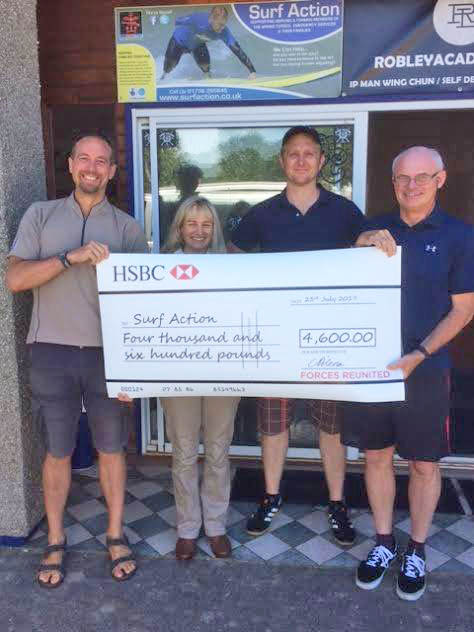 By donating to and supporting ‘Surf Action’, you are helping to promote and protect the physical and mental health, wellbeing and welfare of those individuals who have been injured or suffered illness whilst serving in the armed forces of the crown, reserve forces and the civilian emergency services; and their dependants and carers.

(Just text giving) 100% of the £5 comes to Surf Action (sending the text is free on most networks, please refer to your mobile operator for further details)

Please keep an eye out for more updates about our work with ‘Surf Action’ in the future. If you would like to learn more about the charity’s team, go to the ‘Surf Action’ website.