The Voice of the Military Community
Forces Reunited will be unavailable between 08:00 and 09:00 on Sunday 22 May due to site maintenance. Apologies for any inconvenience.

We’ve teamed up with our sister website ‘forces-war-records’ to offer you dedicated genealogy services.

Get expert support from one of Britain's leading Military Genealogy researchers

Our professional researchers work directly from The National Archives.

Speed through your research and attain information you may never find on your own.

For decades, our researchers have studied the intricacies of Britain’s military and authored books and articles about it.

From specific service documents, to the numbering systems for the 1830s British Army and onto regimental precedence, they know precisely how to find what you need amongst millions of records.

When you hire our dedicated researcher, you will get unprecedented:

This expert will compile what you long to know in an easy-to-read report along with digital copies of all supporting documents. 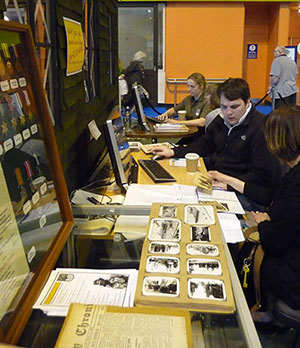 Kevin, having an interest in military history his entire life, grew up with military themed toys and served in the Salisbury Plain Royal Artillery unit of the British Army. He has more than two decades of military genealogy experience, having begun his life's passion after purchasing a medal and researching its history in the mid 1990's.

Awarded the Medal of Merit by the Orders and Medals Research Society, Kevin is also recognised by his peers as an expert of the Victorian era and is the author of several books on medals of this era. Kevin is experienced in the sourcing & research of all eras of British & Commonwealth records.

Susie has an in-depth knowledge of the types of documents and their contents at the National Archives spanning centuries from many years of dedicated research. Susie is the author of the very first War Office 97 register of Soldiers service documents from the 1770s until just before the Great War. Experience and dedication are guaranteed!

Kevin & Susie have agreed to team up with Forces War Records in an effort to provide you with professional research experience at very reasonable rates. The sheer amount of data now available can make it extremely challenging to target what you’re looking for without expert insight. Professional researchers can quickly sort through it all and find the records you're searching for.

Your completed research results will contain

A detailed report summarising the results of the investigation.

Digital images of all documents related to your ancestor.

Notes and analysis from our expert researcher explaining the historical significance of the documents found.

All information will be easily provided through online download.

Information typically uncovered by our researcher

To find out what you can expect from our researcher, select a branch in the following list. The types of records and information generally available will depend on the time period and rank. Please keep in mind that these are not ALL the information available, just the most common - in fact, many of our customers have received much more.

Please note: this service is for historic genealogical research only, it cannot be used to trace living veterans.

We charge a reasonable flat fee for the support of Britain’s leading military genealogists.

To begin, we simply require a non-returnable deposit of £10.00 when you submit your research request. This investment will be deducted from your final payment once research is complete.

What sort of feedback do we see from the research?

Kevin recently completed a commission to research my ancestor. I'm writing to express my appreciation for the outstanding job that he did in locating the records, distilling them into a most informative and valuable document backed up by photographs of the relevant pages (246) of the original documents. Kevin solved a puzzle that I have wrestled with for over a dozen years and provided the vital clue that led me to his birth parish and thence to 3 more generations of the family stretching back to the very early 1700s.

Given the modest cost, the speed of response, the wealth of information and the hard evidence furnished, I am delighted and wish to congratulate Kevin for an outstanding job. Well done that man!

How To Engage Our Researchers

Fill out our research request form as completely as possible. We will notify you if we need more information.


It's that simple! Hit a dead end? If our researcher can't help you find a way out, no one can. Save time and avoid frustration by investing in the intelligence and experience of one of the UK’s top military genealogy researchers today.